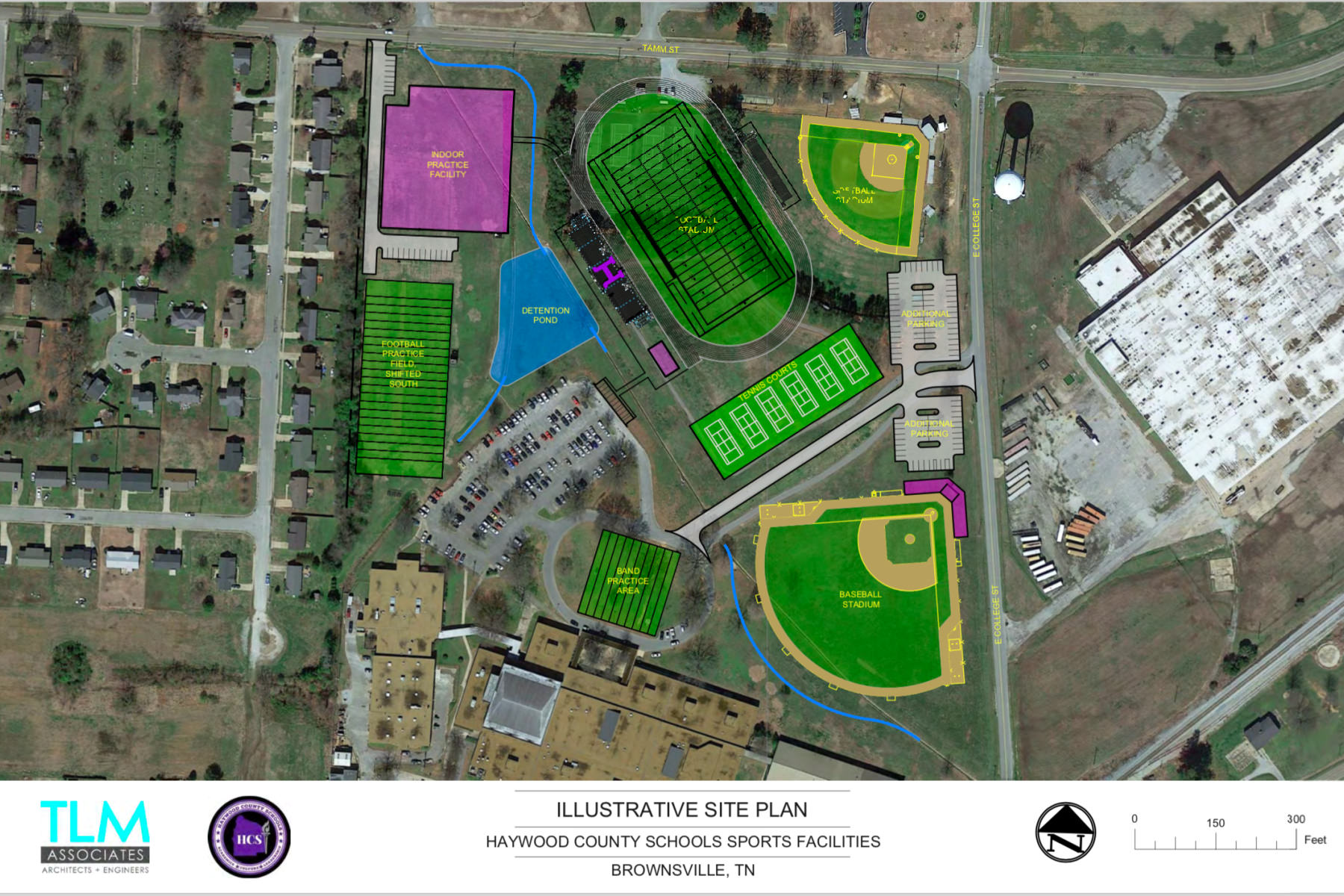 Will Haywood County Schools build a new football stadium? Can the existing stadium be brought to TSSAA standards? Will HCS build an entirely new athletic complex at the high school? If so, is this a smart move for the county? How much would any of these options cost? How would they be funded?

Each of these questions – and dozens more – were explored Tuesday evening in a special-called work session by Superintendent Joey Hassell and fellow school board members. County Commissioners, school administrators, athletic personnel, the county attorney and others were present to weigh-in on the first – of what is sure to be many – open conversations surrounding various designs and ideas for athletic facility improvements, the most notable being constructing a $19M sports complex on the existing grounds of Haywood High School.

“We’re very much in the planning stages. We’re not asking for anything yet,” Hassell opened the meeting in an effort to squash rumors that began flying after the topic originally surfaced at the July 8 School Board meeting. “There is no commitment from anyone; the [school] board has not finalized a plan of how we even want to go about this yet. But we do know there is a need.” And although there was much discussion about which path is best in this proposed endeavor, most everyone in attendance agreed that Haywood County is indeed in need of upgrades when it comes to its athletic facilities.

The current state of L.Z. Hurley Memorial Stadium is what originally sparked this conversation, according to Hassel. The existing stadium has been unusable as a home track for competitions for more than 20 years. A regulation track, coupled with the need for basic structural improvements of the stadium itself, plus the desire to transition to an artificial turf field led to a facility assessment performed by architect and design firm TLM Associates, Inc. “We just wanted to know what we are dealing with – can all these things happen at the current stadium? If not, what are our alternatives?” Hassel told the Brownsville Press.

According to preliminary studies by TLM, the only way to meet all the needs and desires at L.Z. Hurley would be to demolish and rebuild, completely repositioning the location of the stadium on the existing lot, which would then entail new construction of locker rooms, bathrooms and concessions. At Tuesday’s meeting, there was no cost estimate for this project, but the board agreed one was necessary before moving forward with more discussion. Tyler Howell, Director of Facilities, estimates this project could cost near $10M based on what similar structures in surrounding counties cost; he emphasized that was merely a rough guess.

The alternative: changing location all together

Another option – with raw estimates coming in near $19 million – involves relocating the entire stadium – and accompanying amenities – to the high school campus (see rendering on A1). In order to do so, the baseball field and tennis courts would be moved to the southeast corner of the campus. Subsequently, a new softball field would occupy what’s left of where the baseball field once stood. Both the band and football practice fields would be relocated on the property. And a 60,000+ square foot indoor practice facility will be added; this structure is being proposed regardless of stadium location.

So where would the money – potentially $19M – come from?

There are several avenues of revenue that will be explored for funding. Once the school board and administration lay out, what they believe to be, the best path for HCS athletic facilities, they must then present their request to the County Commission, Budget Committee and Education Committee. From there, commissioners must decide if and how much the county can contribute, all while staying focused on the public’s greatest concern: increased property taxes. County Attorney Michael Banks explained that the county’s debt service as well as PILOT (payment in lieu of tax) dollars were viable funding options that would not impact property taxes. Superintendent Hassell says that corporate and private fundraising options will also be explored.

After nearly two hours of discussion Tuesday evening, the conclusion was this: more information is needed, especially regarding pricing. Once TLM provides additional data, another work session will be scheduled. From there, the school board hopes to have enough information to develop an official plan of attack. All meeting dates and times will be shared with the public via HCS media outlets.