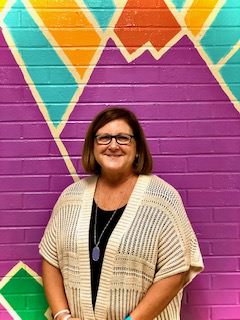 The way a person experiences a sensory event is as unique as the person themselves.  Certain sounds might be soothing to one person, but bothersome to another. Spicy food could be extremely appetizing for someone while being abhorrent for someone else.  A person’s senses and responses to sensory experiences can vary in obvious ways.

In the world of education, however, there are certain senses that need to be activated to enhance learning.  Most schools constructed in the last half-century have limited natural light, a plethora of whitewashed concrete walls, and overbearing fluorescent lighting.  Most of these qualities are not pleasant to the visual senses or the overall, physical learning environment.  That’s one reason why walking into Haywood Elementary School (HES) immediately feels different – the colors abound.

Upon entering the lobby of HES, a mural is positioned on the wall with a mirror placed directly in the middle so a person is seeing their own reflection while simultaneously seeing blue, green, orange, and yellow exploding from behind the mirror.  If one would look directly at the mirror, it would appear they are actually emanating the colors from their own reflection.  While the colors and art are not necessarily subtle, the symbolism is.

If a student were to look at themselves in that mirror and see the multitude of colors shooting like rays from their reflection, they couldn’t help but feel like they were bringing some positivity into the world. That is what Principal Anna Roberts wants for all her students at HES since her first day in 2013.

“I came to observe on Career Day on Halloween and saw all these little kids dressed up as what they wanted to be when they got older. I’ll never forget that.  I started the very next day as principal of HES,” Anna recalled.

Anna grew up in Columbia, Missouri, but found herself living and working in West Tennessee because of her husband’s job.

“We ended up in Brownsville because of my husband’s work,” Anna explained.  “I took a job as a bookkeeper at Anderson Elementary and the principal kept telling me that I should go back to school.”

After some time of thinking about going back to school, Anna finally did.

Before Anna took over at HES, she was an assistant principal at East Side Elementary for two years.   She believes her experiences outside of the education world helped prepare her to lead inside it.

“Education to me is a business – we offer a service.  I believe it’s good to have varying backgrounds of experience before coming into education,” she explained.

While education is definitely a transactional service, Anna also believes the most important part of that transaction lies in building relationships.  She sees that as one of the biggest advantages of being an administrator in Haywood County.

“I love the small community feel of Haywood County.  I grew up in a town of 200 thousand people with different schools for everyone.  It was refreshing to come here and have a very familial feel in the community and the school system.”

“This might age me, but now I’m seeing children of children that I previously taught.  You can’t get that in a big city.  I think we have a very special district here in Haywood County,” Anna said.

One reason that Anna feels that Haywood County is a special district to both live and work is because of the structure of the grade levels and the particular buildings they inhabit.

“Schools are separated by grade levels.  All the students go to the same schools – there aren’t multiple schools for the same grade levels.  I don’t know of any other counties around here that do that.  It really adds to the communal feel of Haywood County,” she elaborated.

Anna and her staff at HES have woven that idea of community into their school through a program known as The Leader in Me (TLIM) program. 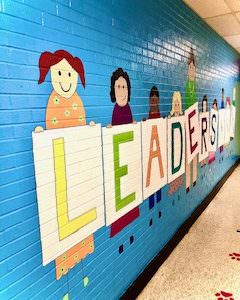 TLIM is based on Stephen Covey’s “The Seven Effective Habits of Highly Successful People” and seeks to empower students to become leaders with an emphasis in three major facets: culture, academics, and leadership.

“TLIM really transformed the school in every way – physically and culturally,” Anna explained.

She knew, however,  that the program had to have staff buy-in.  If the staff didn’t embrace it, the students wouldn’t embrace it.

“The key to TLIM started with the adults – if we weren’t willing to change the culture, it wouldn’t have worked,” she said.

TLIM provides a consultant that works with each school to implement the program with fidelity.  As TLIM was just getting started at HES, Anna noticed that it wasn’t taking off like she had hoped.  That’s when she had an honest conversation with the consultant.

“I was a new principal and our consultant came in and he told me that my faculty didn’t trust me.  That was tough to hear, but I knew I had to gain their trust and that’s when things started to change.  It had to start with me first.”

From there, the program and school culture became interchangeable.  TLIM went from simply being a program to being what formed the culture of the school.

First and second-grade students at HES make the daily announcements.  They serve on panels.  They lead pep rallies.  While it may be difficult to imagine a seven-year-old making announcements or leading an assembly, that’s exactly what happens at HES.  Letting go of those responsibilities, though, was challenging at first.

“It was hard for me to sit on the sidelines during the pep rallies and watch the kids take control of it, but that’s what is so important about the program,” Anna explained.

“That’s how the students learn those leadership skills at a young age – by leading.  It’s not about me or about me controlling things; it’s about me allowing the students to become what they can be as leaders, and that was an adjustment.”

She tries to take the same perspective when leading her school, as well.

“I want my staff to see me as a supporter.  I don’t ever want to be a dictator.  I want their ideas to be our school’s ideas.  I want this to be a communal effort at HES.  I’m here to support; I’m here to promote.  I want to build them up.  I want to be here to help them be the best teacher they can be.”

It is difficult not to notice how pleasing the environment is when you walk into Haywood Elementary School, but those colors and murals are only a reflection of the culture of the school and the people who inhabit it. 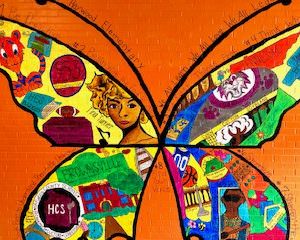 While it is important for a school to be aesthetically pleasing, positive sensory experiences are empty without the teachers and administration who pour into the students.  Not only does Haywood Elementary School have bold murals, they also have adults who are allowing their students to become leaders.  That is when the education process can become life-changing.