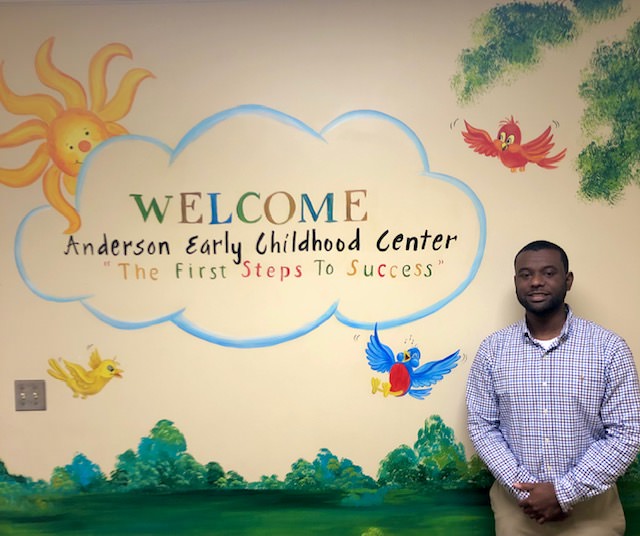 “Renaissance man” is a term and idea that developed from the period of history in which knowledge, art, and special skills grew across culture at an abundant rate.  A modern-day renaissance man (or woman) could be defined as a person who is skilled and successful in many different areas of life – a jack (or jill) of all trades.

Anderson Early Childhood Center (AECC) Principal Chris Haliburton could be described as somewhat of a modern-day renaissance man in the world of education.  There aren’t many college football players who majored in English and went on to teach high school English then ended up being the principal of an early childhood learning center, but Chris did exactly that.

“I went from teaching Shakespeare, Greek Mythology, and Chaucer to helping teachers teach basic foundational reading skills when I was an assistant principal at East Side Elementary.  Some of that stuff seemed foreign to me. I’m an English major but haven’t had to study digraphs and word blends.  Now that I’m working with preschoolers and kindergarten students, having to break that down has been eye-opening,” Chris explained. 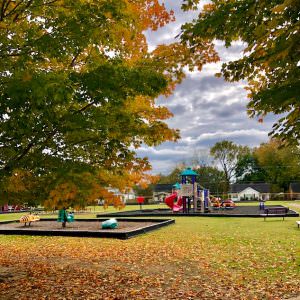 Born and raised in Crockett County, Chris grew up playing sports and valuing education.  Being a student-athlete led him to Lambuth University where he played college football and majored in English.  While attending Lambuth, Chris crossed paths with two people who had a profound impact on his life.

“Charles Mayo and Susan Hudacek had a huge impact on my life while I was at Lambuth.  They both made me want to go into education and make a positive impact on people’s lives in the same way they impacted me,” Chris said.

Chris spent the early part of his career in education teaching English at Crockett County High School.  While teaching was fulfilling, his wife helped convince him to pursue his school administrator’s license.

“My wife convinced me to go back to school to get my administrative certification,” Chris said.  “When I finished my certification, I was looking for administrative jobs in different school systems.  I had a friend who worked at the high school and he told me there were openings in Haywood County for admin positions, so I started applying.”

Chris was hired at East Side Elementary (ESE) by Dr. Tressy Halbrook and spent parts of two school years as an assistant principal there.  After his tenure at ESE, he was named principal at AECC at the most challenging time in recent education history – the time of COVID-19.

“I’ve never been an administrator at a time when COVID-19 didn’t exist.  That’s been my biggest challenge as a principal – trying to navigate COVID the best way possible.  Kids will be kids and I’ve dealt with parents, but the uncertainty of COVID has been pretty difficult,” Chris admitted.

Even in that uncertainty, Chris has tried his best to be steady for the students and the staff at AECC.

“Control what you can control and be able to adapt and be flexible if possible.”

That philosophy has served Chris well thus far in his administrative career.

Chris has had to live out his mantra of adaptability and flexibility in a short amount of time, but it’s one of several qualities that make him an effective leader.   It also helps that he grew up in home with parents who were both educators, has a supportive partner, and was able to learn the ropes of administration from his principal at his first job at East Side Elementary.

“Both of my parents are educators.  My mom is an assistant principal at Trenton Elementary School.  My dad works out of the central office in the Milan Special School District.  My wife has been a big influence, too.  She’s the one who convinced me to go back to school.  And, Dr. Halbrook gave me my first opportunity, so I owe a lot to her,” Chris said.  “I also wouldn’t have been able to have such a smooth transition without my Assistant Principal Teresa Russell and my Instructional Coach Jenna Lea.  They have been integral in my transition to becoming a principal.”

Anytime an assistant is promoted to run his or her own program, whether it be a restaurant or a sports team or a school, adjustments have to be made in order to make the program what he or she wants it to be; a culture has to be created from the top down.

Chris knows what he wants Anderson’s culture to be, and he’s doing his best to shape it.

“I want to establish a culture where everyone feels appreciated.  I want them to know that I know they’re working hard.”

“I want to establish a culture where everyone feels appreciated.  I want them to know that I know they’re working hard.  I see it as a big family.  I know big families have disagreements, but that’s what I want us to be,” Chris said.  “I want to lead by example, but I also want to be a support to my staff.  I want the students to know I care about them.  I do a lot of mental health checks with the students and the staff.  I just want my staff to know I care about them.”

If a caring and supportive culture is established, the academic work can start to pay dividends.  At AECC, there is an immense emphasis on early childhood literacy.  Through strategic curriculum implementation and equitable instruction, the faculty and staff are building a reading foundation with urgency.

“We’re in the process of implementing the Reader/Writer Project here.  We’re going to make individual goals for students based on their reading levels.  Our goal is to get every student on reading grade level by third grade,” Chris explained.

An innovative and effective co-instruction model is also in place at Anderson.

The support and care for students and student learning at Anderson is simply a microcosm of the district.  Chris noticed immediately how close-knit the district felt and it didn’t take him long to understand why he noticed that.

“Our superintendent says we have a school system and not a system of schools and that captures the feeling well,” Chris said.

At Anderson, Chris is affectionately known to the students and the staff as “Coach Chris”.  At the school’s annual Sock Hop this year, Coach Chris dressed as John Travolta’s Danny Zucko character – wig and all.  Some of the students gave him some strange looks, but the teachers found it hilarious.  And, that is what Chris wants to bring to the school – a culture of fun as well as learning.

Everyone at Anderson would probably say the same thing.