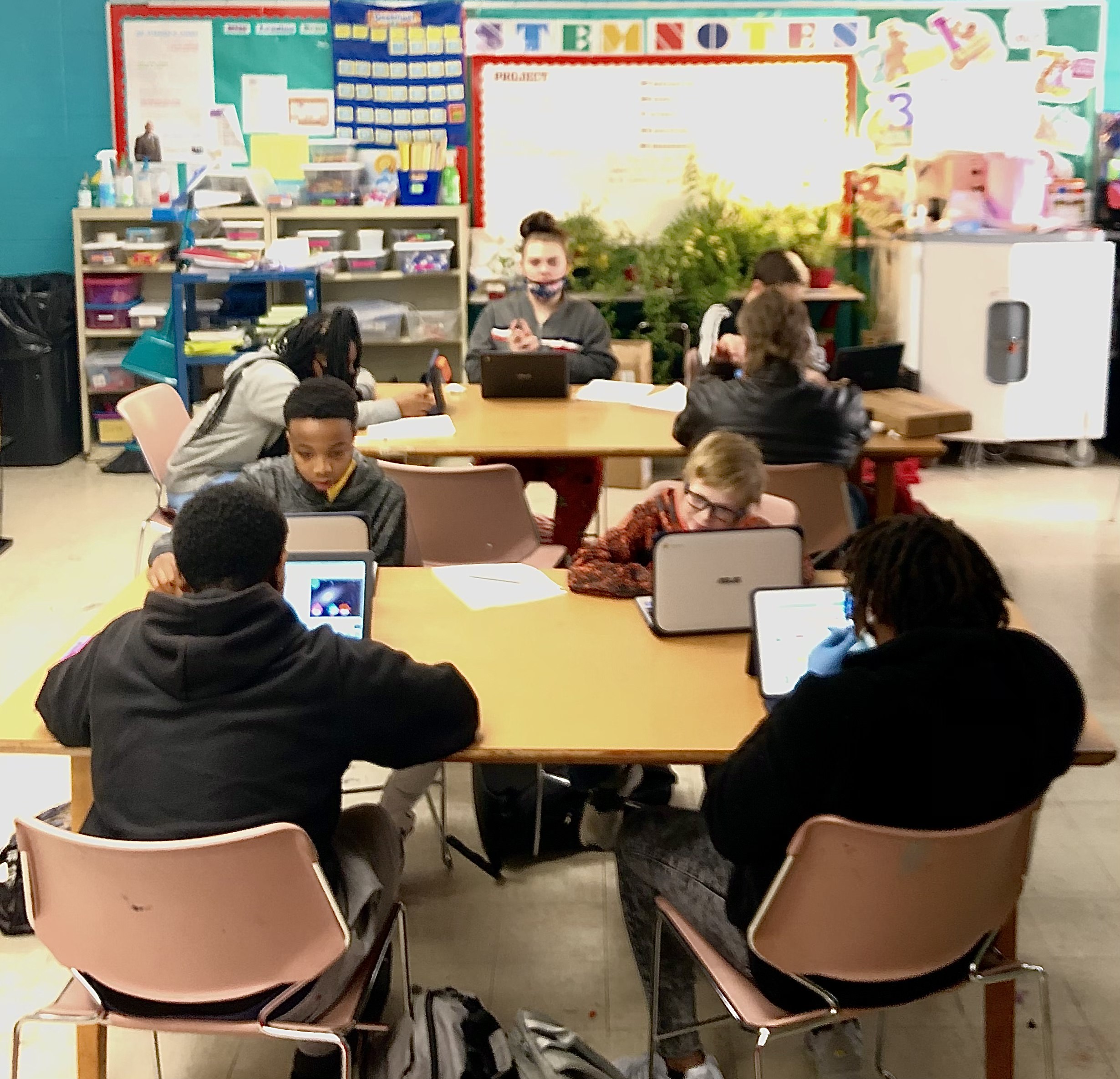 Because students have been exposed to STEAM concepts for several years before reaching middle school, they are able to take those principles and begin to really explore some of the more complex technological aspects of STEAM as well as some reality based philosophies of business creation.

HMS STEAM teacher, Cindy Moore, knows the importance of exposing students to relevant connections with STEAM such as the arrival of Blue Oval City.

“Right now, the students are preparing powerpoint presentations on how an automotive industry can bring people and money to a city.  The students are creating a presentation as if they would be presenting to the local chamber of commerce,” Cindy explained.  “In class, we’ve talked about the different career possibilities in the automotive industry and what those careers would require as far as certifications or degrees.”

These conversations in class also lead to exploration of CTE opportunities in high school that could help HCS students get a jump on learning skills that would help them pursue a career after high school.

“Students can do dual-enrollment in high school and can be certified in a certain area by the time they graduate high school,” she said.

Beyond discussing the necessary and relevant steps for real-life opportunities, students are also introduced to highly engaging projects that allow them to use their imaginations to create and engineer multiple varieties of objects that showcase science and technological concepts learned in class.

“We’ve built paper roller coasters, and that’s a step by step process.  Once the students get a marble through on the paper design, they can move to cardstock.  It’s all about engineering and design to tweak the process as needed,” Cindy said.  “We also did some introductory robotics work that led to them building their own robot out of cardboard.  Each class had four groups and each group built their own robot.  The groups had to initially design a prototype.  After the first week, the group evaluates what they need to change or improve to get the robot designed to do what it was originally intended to do.”

Group projects like these help build teamwork skills at an early age as well as allow students to learn from mistakes and adjust in the middle of a project in order to create the most efficient project they can.  It’s this type of real world experience that makes STEAM so valuable.

The project the students seem to love the most, however, was when they were able to create their own robot.

“The students loved building the robot.  I gave them limited instructions.  The only thing I provided was cardboard, tape, and hot glue.  They couldn’t go out and buy anything.  They could use anything recyclable.  It’s learning to use what they have.  The robot had to move on its own.  The only thing it HAD to do was to move in some way,” Cindy explained.

The students were very creative when it came to the movement of the robot.

“Students used a skateboard, a saw with a DC motor, a microwave – they got very creative with it,” Cindy said.

While building the robot was what the students enjoyed the most about STEAM at HMS, there are many other opportunities that students were able to explore.  The classroom is loaded with usable technology.

“We have 3-D printers and laser printers.  Over the summer, we did a production design course where students were given a hypothetical situation on how they would start a business with 100,000 dollars.  We had groups designing t-shirts and creating t-shirts with the press that we have here based on their business,” Cindy said.

STEAM at HMS provides students many opportunities to narrow their focus while exploring endless possibilities before entering high school.