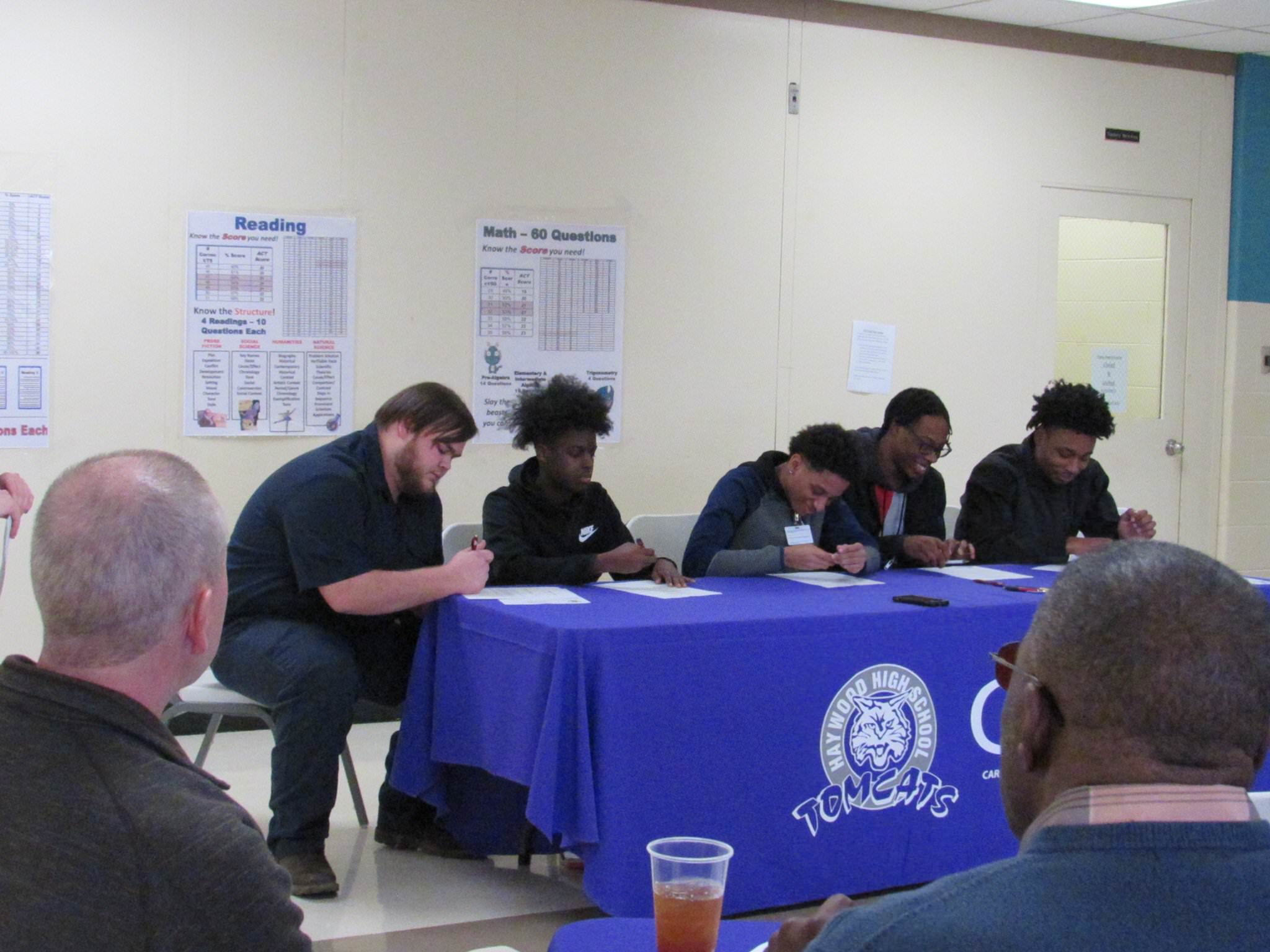 Thursday, February 20, was TCAT Signing Day. Members of the Board of Education took the time to recognize 13 students either currently enrolled or planning to dual enroll at TCAT Whiteville during the monthly Board Luncheon.

Jay Boyd led the meeting in prayer, followed by lunch catered by ZZ’s restaurant and then the student recognitions.

After a brief introduction of TCAT’s programs, Brittany Avent called each student to the front to introduce themselves and sign their letters of intent. Two Tomcats were unfortunately unable to attend as they are currently enrolled at TCAT full time. Jeremiah Morgan, Luke Scifries, and Robert Myers all signed to attend TCAT under the study of Industrial Maintenance, which happens to be the number one rated program by industries in our county. TayShuan Kinney, De’Qwanta Lyons, Christian Perry, Christian Spencer, and Preston Manley study Automotive. Marcus Quinn is studying Computer Information Technology. Marcus has been dual enrolled at TCAT for both spring and fall semesters and attended a board meeting at the beginning of the year to speak on his experiences in the program. Lastly, the four students currently enrolled in the HVAC program are Quandaries Henley, Donovan Woods, Jarvius Taylor and Xavier Rosales. These students spent two hours a day on campus in Whiteville with the intention to complete or nearly complete at least the first trimester of TCAT. Prior to the student introductions, TCAT Pathways Coordinator James Farmer was called the front to speak briefly and obtain recognition as this program would “not be possible” without him. A current objective of the program is to identify young scholars as early as 7th and 8th grade to begin exposing them to on-campus activity at TCAT so that they have a full four years to work on dual enrollment.

The second portion of the luncheon was dedicated to talk about a grant Haywood County Schools received in partnership with TCAT Hardeman County. Together, one million dollars was awarded to the programs with HCS taking in $500,000. That money will go directly to Mr. Moss’s industrial maintenance program at HHS to renovate the shop, move the classroom into the shop, and upgrade the equipment. A $10,000 STEM grant was also awarded to HMS, with the funds going towards creating an AP computer science program in alignment with HHS’s coding program. Concluding the program, the CNA program at HHS also received $10,000 in grant money to fund new equipment and possibly scrubs for the nursing students.

To wrap things up, Mayor Bill Rawls stood to give thanks to all involved parties in the TCAT Signing Day for bringing these opportunities to Brownsville youth.