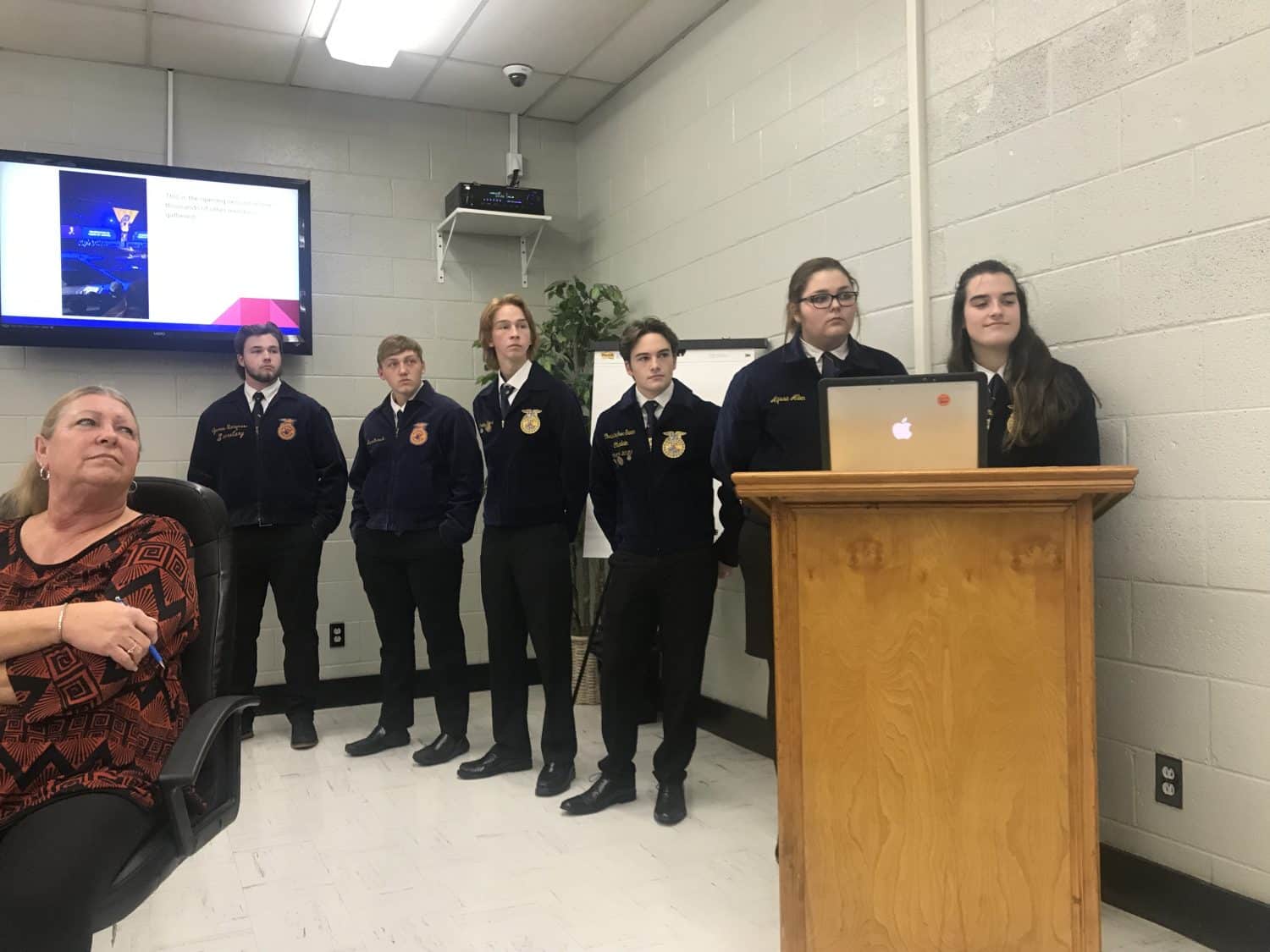 The November Haywood County School Board meeting began with a unanimous vote to extend Superintendent Hassell’s contract by one year to December 31, 2023.

Callie Coats and John Joyner, leaders of Haywood High School’s Future Farmers of America (FFA) program, attended the school board meeting with six Haywood High School students.  These six student members of FFA attended the meeting to thank the board for allowing them the opportunity to attend the 92nd FFA National Convention in Gatlinburg.  Each student took his and her turn to speak about their personal experience and the positive things they experienced at the convention that will continue to benefit them throughout life.

Alissa Allen – “It was a great week and we are all basically like family now….We went to different workshops and met new people….I met a girl from Alaska and we are actually still in touch now.   I raise rabbits and met a guy from Minnesota who has a dairy farm and we talked about that.  It was such a great experience.  The bus ride makes you feel close.  It was 9 hours so you had to feel pretty close.”

Christopher Suarre – “We met state officers from Oklahoma and California and they were at the national convention like it was nothing.  I was like, I can do that.  So, you can really do anything.”

Preston Moore – One experience that stood out to me was a workshop called ‘Writing the Woe’ and that’s where you had to write down a main problem, that you have in life, on a sheet of paper.  Mine was procrastination.  They could crumpled the piece of paper and threw it across the room.  So everyone in the room was throwing paper balls at each other and that was a site.  At the end they sat us down and had us pick up one ball of paper and read what other people’s problems were.  I got the exact same problem, procrastination!  That could have been from somebody anywhere in the United States.  I had no clue who it was but it gave me a sense that we are all so different but our problems are the same and we are all in this together.”

Mason Phillips – “What I learned is that everybody has a different meaning behind their jacket.  Everybody doesn’t have to drive a tractor or work on a farm to be in FFA.  You can just join to step out of your comfort zone.”

Charles Phillips – “I think the biggest take-home is that FFA, as a whole, is a lot bigger than people think.  seeing all those blue jackets from all across America is something else.  Most of the workshops were centered around leadership.  How can you put this jacket on, graduate high school and go out into the work place and use what you have learned through FFA the rest of your life?”

Hannah  Littlejohn – “I enjoyed getting to meet new people and having a chance to share our differences in FFA chapters because we were all from different states.  For example, here in West Tennessee we compete in the skill CDE consisting of loading wiring and much more, however FFA members from Alaska shared that they don’t really compete in the CDE however, they are very big in wildlife management,”

Shelby Littlejohn – “During our trip to the FFA National Convention I learned so much.  We went to workshops throughout the convention center, and they were called ‘Writing the Woe’ and ‘Don’t Be a Chicken’ .  My favorite workshop was ‘Writing the Woe’.  The workshop worked with hands-on things to get you out of your comfort zone by anonymously writing things down things you want to do but are too scared to do and things you want to accomplish in life.  The neat thing was even though you didn’t know who wrote what, you realized just how many strangers you could relate to.”

In appreciation, each board member was given the gift of a sleigh and reindeers made by the FFA students.

Yvette Blue explained the Tennessee Department of Education textbook waiver process. Discussing that it is adoption year  for English Language Arts and the investment the school system has made in new and wonderful learning materials such as LearnZillion.

Brittany Avent, CT Director and Secondary Supervisor for high school, shared an update on the TN Pathways Certification and GIVE Grant.  She shared an overview of the vision for CTE as a whole and how Tennessee Pathways and the GIVE Grant fit into that.  Haywood County is the highest ranking applicant in the state for both of pathways.

Mini-grants were discussed and approved by the board to make sure we are getting money into he hands of teachers for the things they need.  This year the number of grants were cut in half but the total amount stayed the same.  Much grant focus is being given to the STEAM (Science, Technology, Engineering, Arts and Mathematics) labs in each school.  Steam encourages working together.

The board approved a request by the City of Brownsville for 5 acres of the former hospital property to be donated to the local Head Start program in order for them to build a new early learning center.

Mayor Rawls spoke about the potential to have an adult in the Jackson State adult learning center and their child next-door in the early learning center.  This would also allow for expansion and hopefully adding Early Head Start.  Early Head Start is for ages 0 – 3.  With the potential of this addition Mayor Rawls said that “We will be able to take children from cradle to career.”

Allen Currie and Superintendent Hassell both spoke with these students and encouraged them to bring their and other students’ concerns to the board.  Currie spoke of their importance and how it’s a team effort among the board and students to keep Haywood great.

Other School Board Business:

There are very exciting things happening in Haywood County Schools!