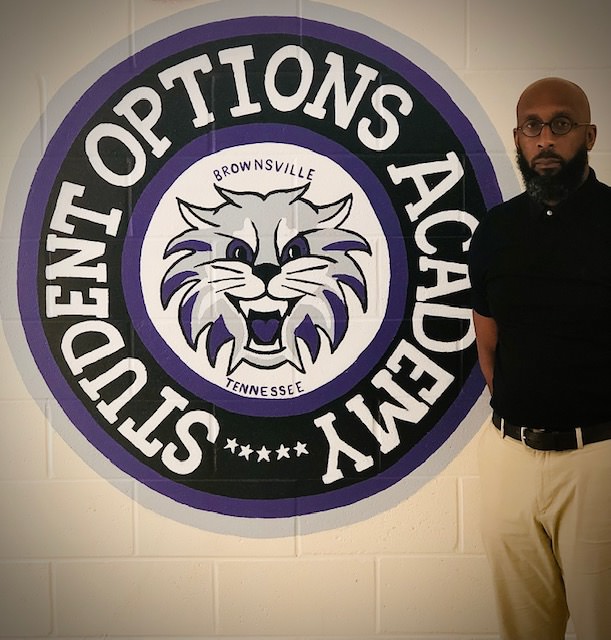 There are a multitude of sentences like the one above that aren’t immediately understood based on the words that make it up, but seem to be said quite often. English teachers would call sentences like that an idiom – a phrase or sentence that means something different than the words that make it up. Idioms can sometimes be universal truths, but, in other cases, simply be a collection of words that don’t capture their intended meaning. In the case of Student Options Academy Principal, Grover Harwell, you definitely can go home again. Not only can you go home again, but you can help make a difference in the community that helped raise you.

After graduating from Haywood High School, Grover attended Austin Peay University and obtained his degree before receiving his Master’s Degree in Business Administration from Webster University.

“I did not want to be in education,” Grover explained. “I wanted to be in the business and marketing world.”

After several years working for FedEx in Memphis, however, he began to feel unfilled professionally. Grover wanted to find a way to give back to people the way he experienced people giving to him while growing up in Haywood County. That led him to pursue a career change in the form of education.

“I just wanted to come back and give back to those who poured into me. Even when I worked in Memphis, I never left Haywood; I would drive back and forth to work in Memphis. My heart is in Haywood County,” he said.

“There is no gray area for middle school. You either love teaching middle school or you don’t. I never left that age group (until now) because I loved it. I think you have to love it to do it as long as I did it,” he rightfully explained.

While teaching at Haywood Middle School, Grover had the chance to work for Yvette Blue. He credits her as one of many people in his life that started him on his path to becoming an administrator.

“I’m standing on the shoulders of a lot of great administrators that have come through Haywood County. Ms. Yvette Blue is my inspiration for me to do what I’m doing. She saw me as an administrator when I only saw myself as a teacher and a coach,” he said. “When someone sees you as someone more than you see yourself, that can be powerful. I hope to do that with my faculty and the students in this building.”

After serving two years as an assistant principal at the very school he was a teacher, Grover became the principal of the Student Options Academy (SOA), an innovative school within Haywood County.

The SOA is simply what it says it is – a school that provides options for students who need them. 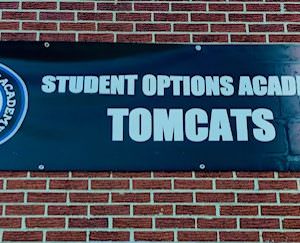 Like all school districts, Haywood County has students who may fall behind on their high school credits or need to work to supplement a family’s income. Some students need to provide childcare for their children or younger siblings, so the demands of a traditional, five-day-a-week school schedule are difficult to meet. This is one of the many aspects of the school with which Grover connects.

“When you come from corporate America, they always tell you to think outside the box, but in education that isn’t an option sometimes,” Grover said. “This school is different, though. This is the epitome of ‘thinking outside the box.’”

The main thrust of any school district is to educate the students in that district. Often, circumstances in life can interfere with the educational opportunities for some students. For these reasons, the SOA is a vital part of the educational support system in Haywood County.

Over the last two years, every school district in the nation has had to be creative in how students were receiving an education. While most students in Haywood County are back to learning in classrooms, some still have extenuating circumstances that prevent them from doing that. The SOA bridges the gap for them.

“We have a student whose parents have health issues and there’s no virtual option for high school students right now, but we can provide that. We give them options.” Grover said.
Along with being an option during the challenging times of COVID, the SOA also provides options for other students who are pursuing a fast entry to the workforce.

“We can help students develop a technical skill before they graduate and allow them to go to work, so they’re working a lot of hours and getting their degree at the same time. It’s a great way to get “on the job” training while still being able to get their high school diploma.”

As the principal of such a diverse learning school as SOA, Grover keenly recognizes the importance of his role. He understands that positive relationships with students are paramount to learning and motivation. He also wants to make sure the students at his school know that he is there to support them.

As for how he wants to be seen by his teachers, it’s fairly simple.

“I want my teachers to see me as someone who trains and empowers them. I want to grow them to what they want to be if they want to move beyond the classroom. I want them to grow in some way in their profession. I want to make sure I help them do that. Someone did that for me and I want to pass that on.”

He also knows that investment in students and teachers can help create the culture of excellence he wants to see at SOA.

“Your best is good, but excellence is expected. Give me your best, but I’m looking for excellence no matter what it is,” he explained. “The pursuit of excellence doesn’t have to be educational. I’m not asking my students to make all A’s or all B’s, I just want them to strive for excellence. Do the little things: look someone in the eye when you talk to them; that’s excellence.”

Depending on where a student starts and where they finish, excellence can look different for everyone. The Student Options Academy provides flexibility for each student to achieve excellence in their own way.

Even though Grover never technically left Haywood County, he has come home again to the same school district that invested in him. Now, he’s pouring back into the same community that poured into him.