By: Carlton Veirs, The Brownsville Press

It’s hard to imagine the impact or if there has ever been anything more important to the lives of Haywood Countians. Monday afternoon, September 27, at 3:15, Governor Bill Lee and Economic and Development Commissioner Bob Rolfe announced that Ford Motor Company in partnership with battery manufacturer SK Solutions will build America’s largest auto manufacturing facility in Haywood County on the Memphis Megasite near Stanton.

It’s where Ford will build its new all-electric F-150 pickup and the batteries needed to fuel them.

Saying the deal will have a “generational impact” on Tennessee, Governor Lee reported the transaction represents “the largest single deal in the state’s history” and makes “Tennessee the leader in the future of the auto industry.”

“This is a day Ford and the auto industry will never forget,” said Mitch Bainwol, chief government relations officer for Ford Motor Company. “The future is electric and there is no question about that.”

In addition to its mammoth size, the plant “…will be our most advanced, high-tech facility in the world,” commented Lisa Drake, Ford’s chief operating officer for North America.

Ford said it looked as if the site, located on 4,100 acres, most of which is located in southwest Haywood County, was “tailor-made” for Ford. 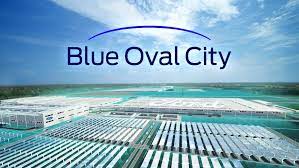 According to a news release, the campus will include the Ford assembly plant, a supplier park and a battery manufacturing facility operated by BlueOvalSK, Ford and SK Innovation’s joint venture.

The release states, “…site will become a vertically integrated ecosystem with key suppliers and battery manufacturing on the same campus where Ford will assemble next-generation all-electric F-Series trucks.”

Governor Lee said Ford and SK won’t occupy the entire 4,100 acres and the state continues to solicit other manufacturers.  In separate news accounts, Ford says the facility will consume 3,600 acres.

How did we get them?

Negotiations have clearly been going on for months if not years, though the process was not disclosed Monday.

Optimism spiked when, earlier this year, Lee and Rolfe held a press conference saying the state would release the money needed to complete the sewer system Rolfe called the “final gating item” needed to make the site shovel ready and compelling for a manufacturer.

Luring Ford and SK wasn’t cheap. The state will have invested $226 million in the tract and its infrastructure and has offered the developers $500 million in incentives. Precisely how the money will be used is unclear, but Governor Lee said workforce development will be paramount.

Tennessee was in competition with 15 other suitors trying to win the deal. Governor Lee said it was Tennessee’s “commitment to workforce development that put us ahead.”

It’s unlikely to fail, most believe. Adding the country’s largest manufacturer in West Tennessee completes a “trifecta” of state-of-the-art, giant automobile factories in every grand division of the state.